Time flies, it is now the 8th month of 2018! I believed my Singaporean and Malaysian friends are quite familiar with this month, right?

Wait, you must be puzzled by now. “What’s so special about chicken rice, man?!” Of course not the normal type, I’m sharing with you the healthier version, Hainanese Chicken Brown Rice! 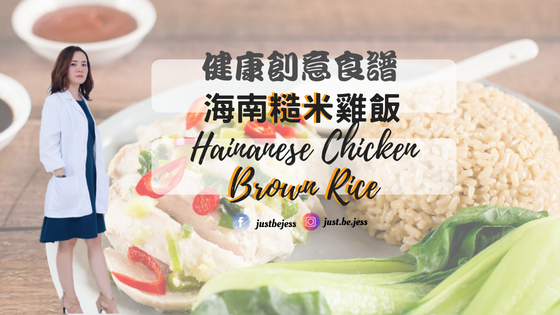 Before I share with you the recipe, let me tell you a bedtime story about delicious chicken rice.

Long long time ago.... Okay, maybe not that long.
According to some sources, Hainanese Chicken Rice was being served as chicken rice balls in the past.
The reason being was to preserved the warm temperature, so that the wives could serve it hot to their husbands working in the field.
Nonetheless, a truly delicious Hainanese Chicken Rice and sliced chicken tastes as good when it turns cold! 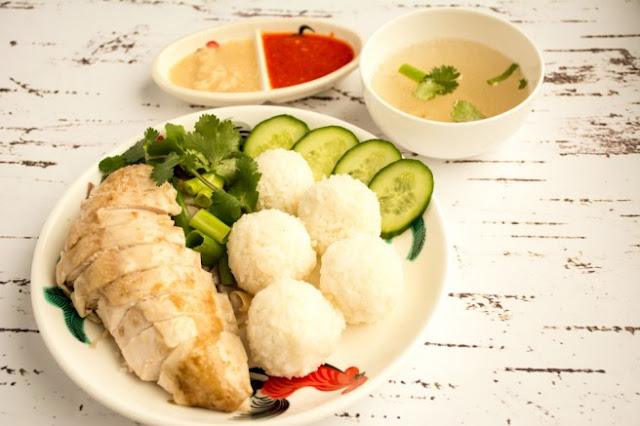 Having said that chicken rice is delicious, what about its nutritional value?

1. Traditional chicken rice uses white rice,
which is a refined grain that is lack of dietary fibre.

3. Chicken portion is bigger than recommended intake per meal, which lead to excessive protein and fat intake.

4. Lack of vegetables being served, which cause low dietary fibre intake.

However, this does not mean we cannot eat chicken rice.
THERE’S NO PERFECT FOOD IN THIS WORLD,
we can only make a HEALTHIER OPTION.

Here are ways for us to enjoy healthy and delicious chicken rice:

1. Replace white rice with brown rice, either partially or entirely.
But, it does not mean that you can have 2 bowls instead of 1 now, both possess the same amount of calories. They only differ in terms of dietary fibre and micronutrients level.

2. Reduce the rice portion to only ¼ of your plate.

3. Reduce the chicken (regardless of the blanched type or roasted one) portion to ¼ of your plate.

4. Add-on with a plate of vegetables to increase the dietary fibre content, for example cucumber, lettuce, stir-fried Kai Lan or Bok Choy, as well as bean sprouts.

The key to maximize the taste of a delicious Chicken Rice is definitely a FATTY CHICKEN!

Well, frankly speaking, I usually choose DRUMSTICK whenever I eat chicken, because the taste and texture is just irresistible! XP
I wouldn’t give up just because of so called “FAT”, well, we need fat for our body.
In addition, I don’t consume chicken that often, and everytime only keep to a portion without adding on other protein options. So, what’s the concern?

Moreover, removing chicken skin is definitely not my practice.
Yes, it contains unhealthy fats, but it does contain small amount of healthy fat as well.
What’s outweigh this is a routine exercise habit, 3-5 times in a week!
Fatty chicken should not take the blame for human’s greediness for frequent consumption, huge portion intake and practicing sedentary lifestyle.

It has been a trend pushed by both Singapore and Malaysia government to encourage higher uptake rate on wholegrains.
However, the typical local delights seem can’t fit into this plan, as refined grains such as white rice, vermicelli and yellow-noodles are being used heavily.
Therefore, I have decided to share with you, my lovely readers a healthier way to enjoy Hainanese Chicken Brown Rice! 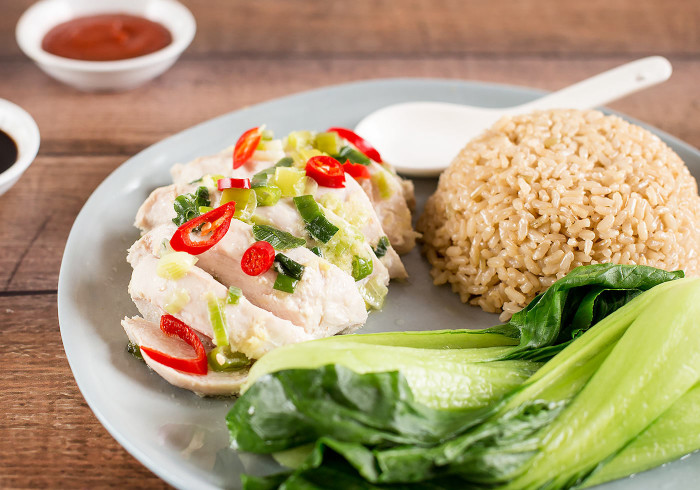 I hope you guys like the idea of incorporating healthier concept into the traditional delights.
Not only does it increase the nutritional value, but help to retain the deliciousness of the traditional taste as well.

Chicken：
Rice：
Step：
*Tip：you may use some chicken broth to make the chilli for greater taste experience!
Written by Justbejess at 20:04

更多實在的營養知識請點擊這裡！ Join us for REAL NUTRITION！

Get your SGD33 Travel Credit here!

SGD8 off for your first ride!